Visionary artist, filmmaker, and author Steven Cerio:. Created  his own loving and sarcastic expressions of joy for three  decades. His unique style helped set  the stage  for the neo-psychedelic revival in New York City.  Devotees of The Residents will be familiar with his cover art for their, ‘Loss of the Lizard Lady’ lp, official tour posters and tour shirts for the group including  the Icky Flix and ‘Demons Dance Alone’ and ‘Buny-boy’ tours, vinyl figures of “Classic eye” and “Mister Skull’ for Toy Tokyo (NYC), target designs in “Dixie’s Kill a Commie Shooting Gallery” from their cd-rom “Bad Day on the Midway” (also used as their Stars and Stripes video featured in Icky Flix DVD), notable art and mask designs for their film       “Disfigured Night,” animations in the “Birds in the Trees” video for “The Commercial DVD” which were inducted into the permanent collection of The Museum of Modern Art in New York.
Started in 80’s zines and soon after called  upon by galleries and diverse clients including Nickelodeon, Comedy Central, Warner Brothers, A&M Records, Entertainment Weekly and Penguin books.
Four years in the making , FRESH HELL in Fits- conterfeit tales and miraculous events_a falsified history of The Residents” is  40 pages of finely detailed visions of a singular world  done in Cerio’s unmistakable style. This narrative comic records Cerio’s falsified retelling of the impossible evolution of performance art magnates The Residents. A bold and wildly inaccurate travel journal along an asynchronous timeline losing you perilously in a superstitious fog. All predicated on nary a single kernel of  truth, this wandering evolutionary tale of a blinkless spirit trying to find the  right body. A story influenced by the group’s early releases that inspired the artist as a teen in the suburbs of New York with their spirit of free adaption and fruitful exploration. “The spirit AND the music were both so looming and beautiful…like open doors” said the artist in an interview with Seconds magazine.
this book idea found its perfect home with the  eyeball museum
full color cover
40 pages
8 full color pages including centerfold
first 33 come with a signed and numbered certificate by the artist with an original drawing on opposite side.
Collectors edition  includes …print on 300g paper, Button and Sticker.

“Sunbeam on the Astronaut” by Steven Cerio 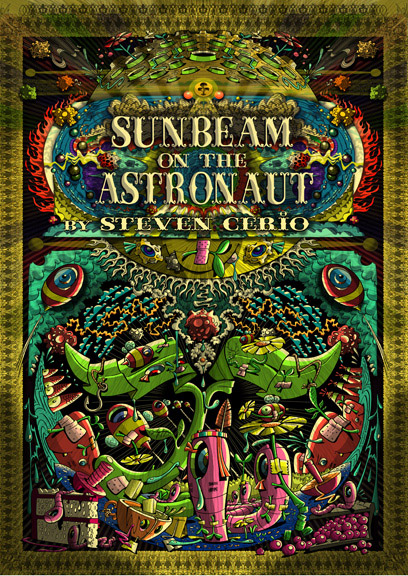 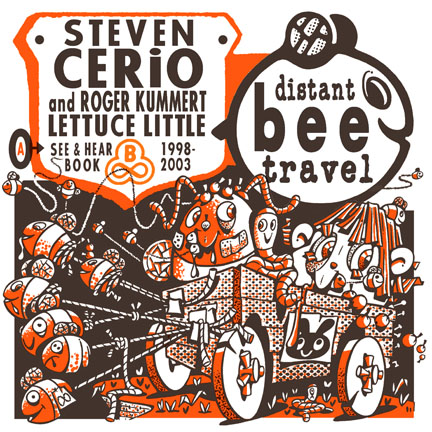 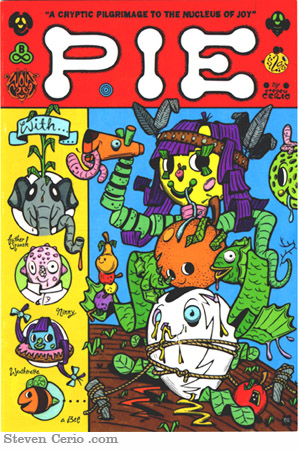 “A cryptic pilgrimage to the nucleus of joy”

“Steven Cerio is the artist that can best be described as suffering dark influences while still being carried by his pregnant mother who unfortunately witnessed a runaway truck full of raw calamari run through the wall of a toothpick factory.”

Wow Cool serves up a slice of Pie; the first full-length storybook by STEVEN CERIO. In these 28 pages of heavenly delusion you will happen upon gleeful bees, effervescent elephants and friendly vegetables on their cryptic pilgrimage to bliss.

Steven Cerio and the many creatures that populate his Pie comics are already familiar sights to readers of Steven Cerio’s ABC Book: A Drug Primer, Graphic

E-book available at at AMAZON.com   http://www.amazon.co.uk/Pie-Steven-Cerio-ebook/dp/B00D9D2WWO