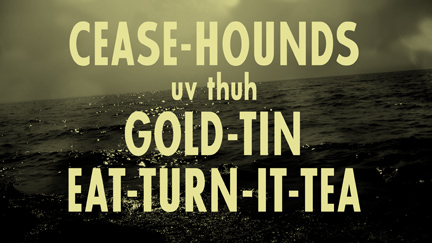 Steven Cerio created this film for the Lowell Celebrates Kerouac group located in Jack Kerouac’s hometown of Lowell Massachusetts. Though I’ve enjoyed this work since my teens the plot and characters (other than Jack!) of the novel did not influence the film, instead I used inspiration from the abstractions of the poem that ends the novel entitled “Sea: Sounds of the Pacific Ocean at Big Sur” for the film where he uses onomatopoeia to perfection to describe the sounds of the sea. The written word play I used in the title and throughout was both a loving tribute to the man and to his often playful craft and a humble way to incorporate words of my own without quoting or stealing lines. For the soundtrack I used actual sound recordings of the waves in Big Sur coupled with my drumming with two bass drums and my tom-toms tuned down low to add to the thunder of the California coast. The film was screened on March 12 – the anniversary of Kerouac’s birthday at Lowell Telecommunications Corp Gallery, 246 Market St before a performance by Kerouac’s friend and Beat musician/performer David Amram. It was a great honor for me.